On Wednesday, the group spent the day estate planning for members of the Lac Courte Oreilles Band of Lake Superior Chippewa. Wednesday afternoon, the students met with the Chief Judge of the Lac Courte Oreilles Tribal Court, the Honorable James H. Schlender, Jr. Jude Schlender gave the students an overview of his wide and varied docket and spoke with the group about the importance of asserting tribal jurisdiction when possible.

During the course of the week, students volunteered 300 pro bono hours and served close to 100 tribal members. This trip was made possible by generous donations from the following individual, tribal, and corporate sponsors: 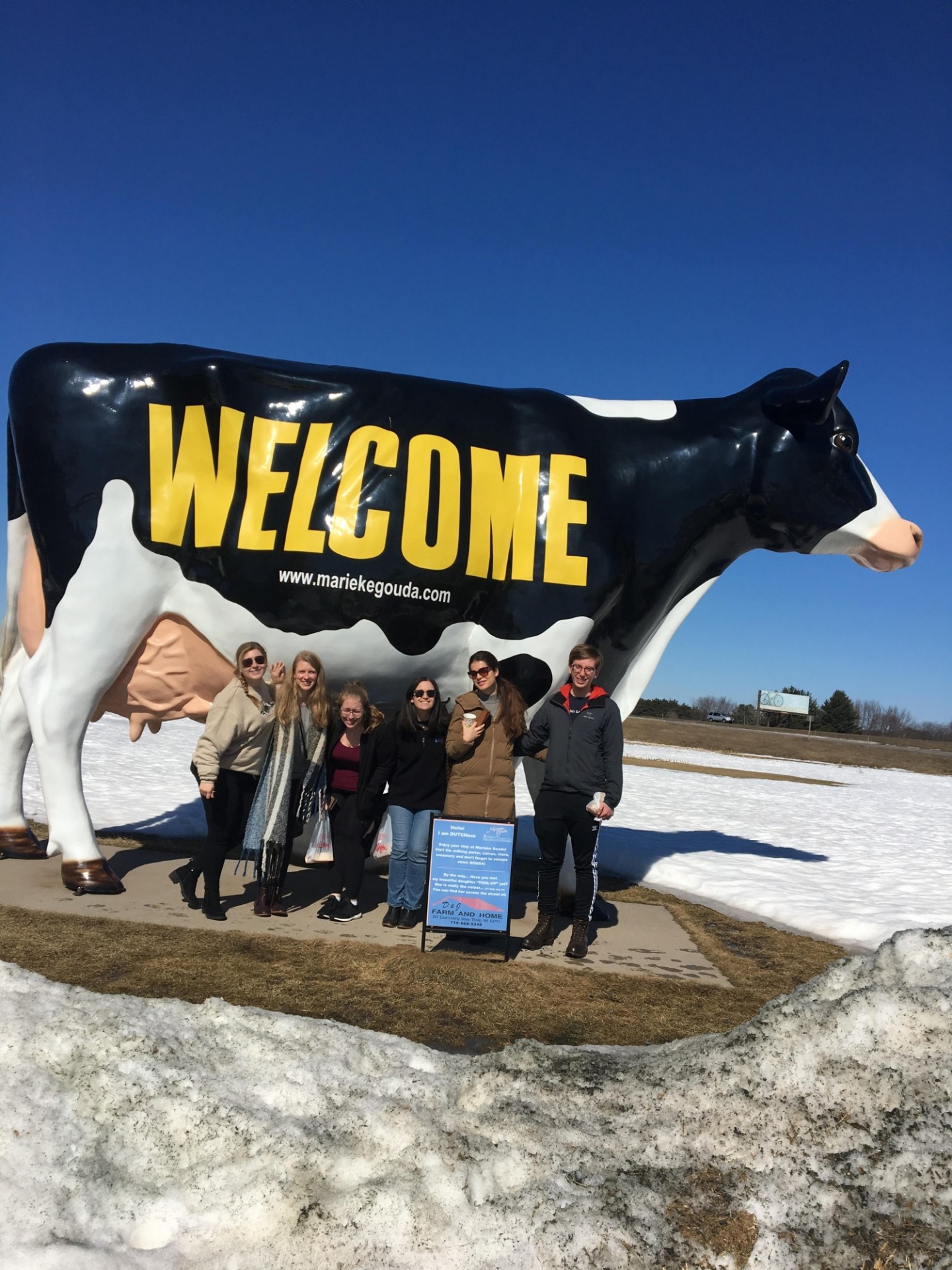 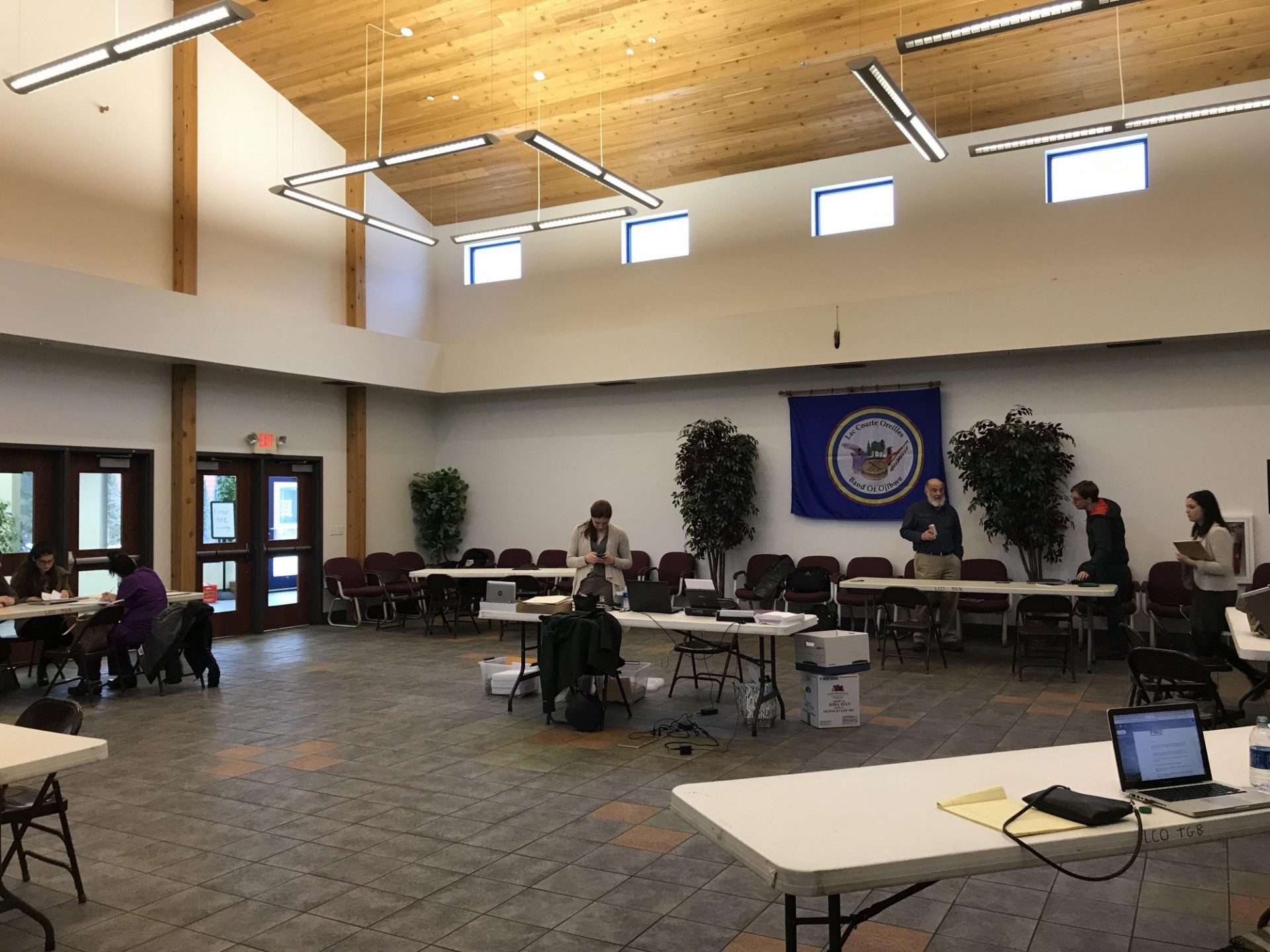 On Monday, students traveled to Anadarko to conduct a wills-writing and ask-a-lawyer clinic to tribal members residing near the Bureau of Indian Affairs’ Anadarko Agency office, which administers Federal programs and services to the Comanche Nation, Apache Tribe, Kiowa Tribe, Caddo Nation, Delaware Nation, Fort Sill Apache Tribe, and Wichita and Affiliated Tribes. After the clinic, the group met with a Kiowa allotment owner who OILS represents in a trespass suit against an energy company for placing a natural gas line beneath the allotment without consent. The case is Davilla v. Enable Midstream Partners.

On Tuesday, the group wrote wills and answered general legal questions for tribal members located near Holdenville in the Muscogee (Creek) Nation’s boundaries.

Throughout the week, students collectively volunteered 520 pro bono hours and served approximately 60 tribal members. This trip was made possible by generous donations from the following individual, tribal, and corporate sponsors: 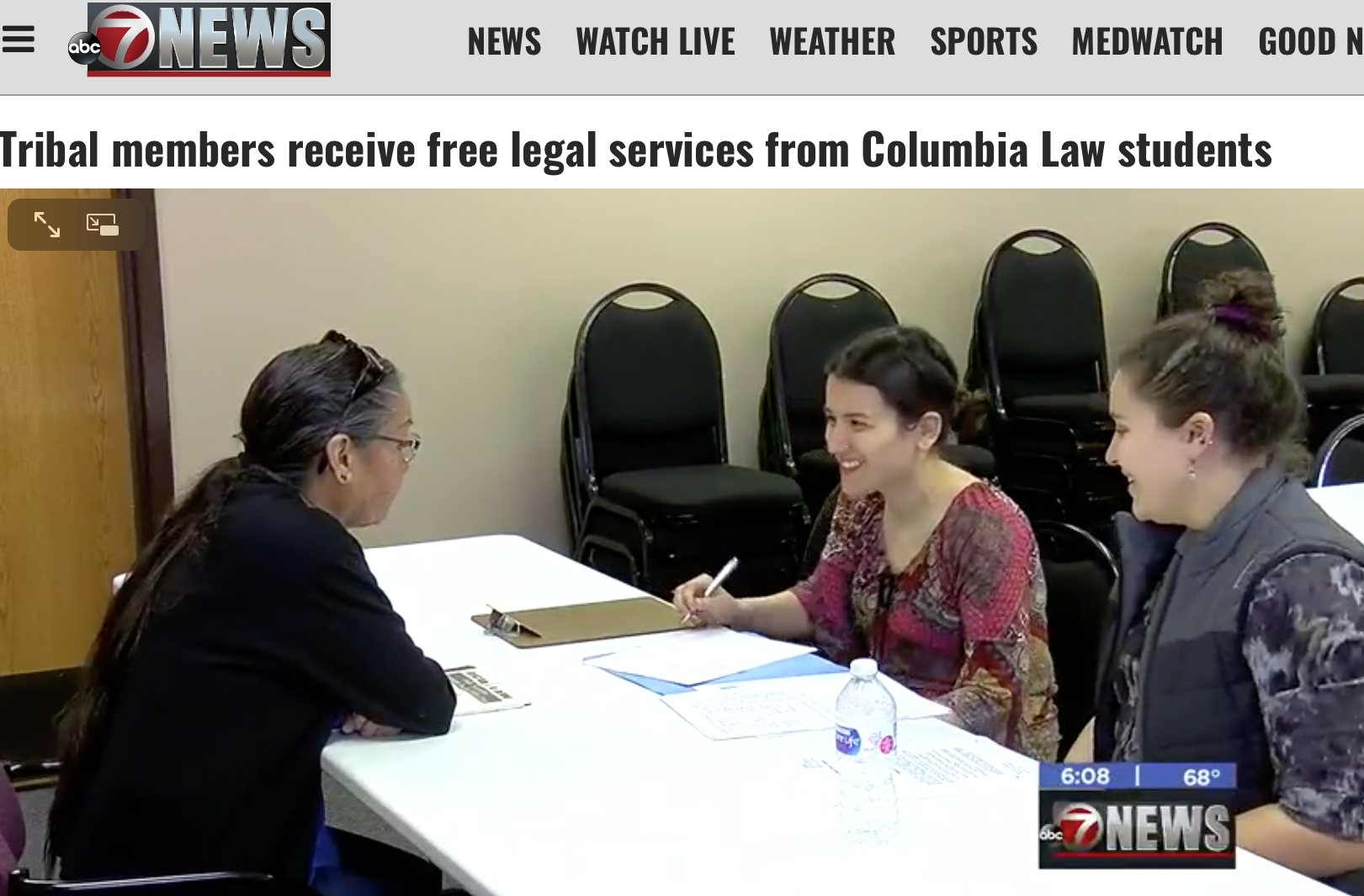 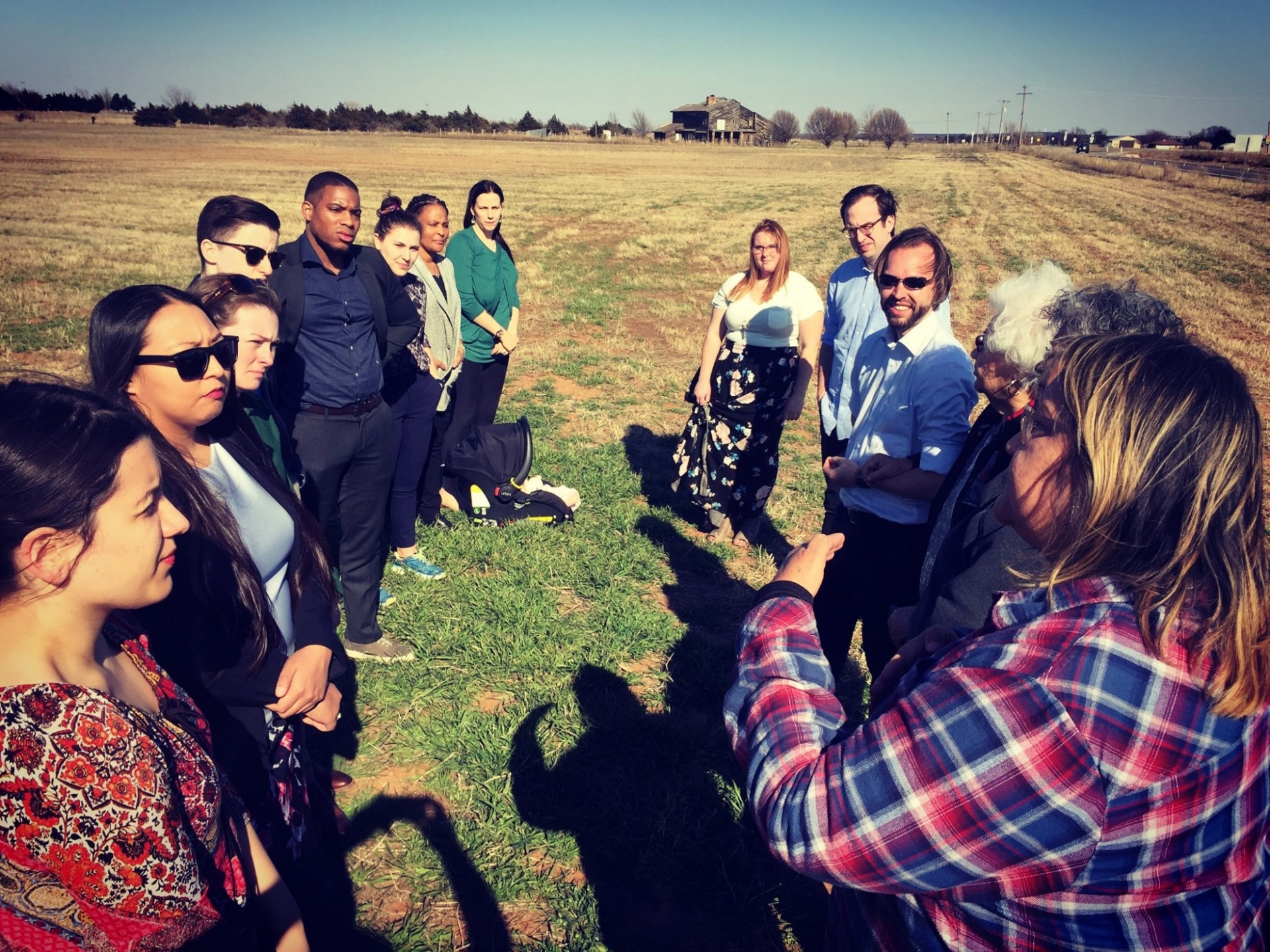 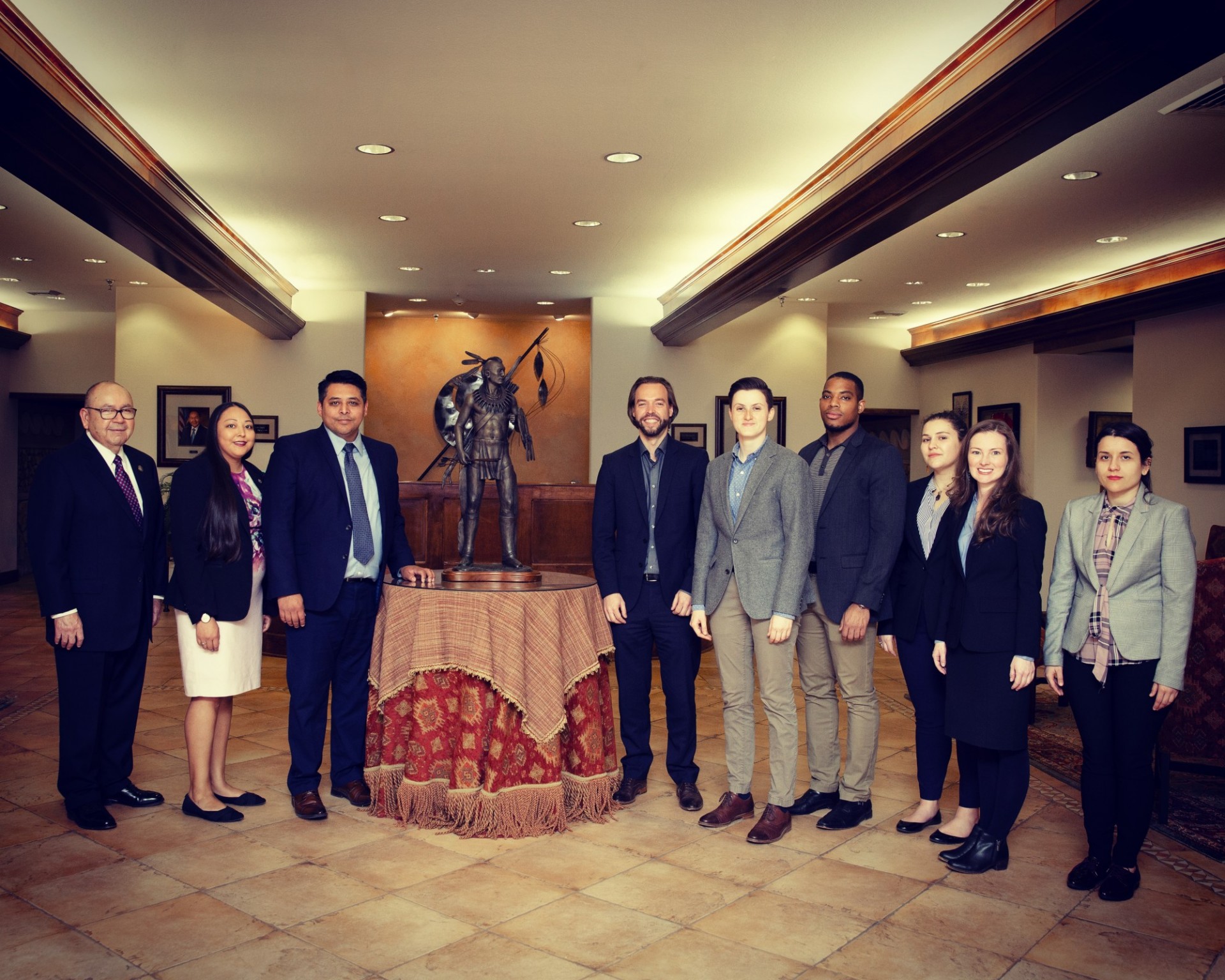 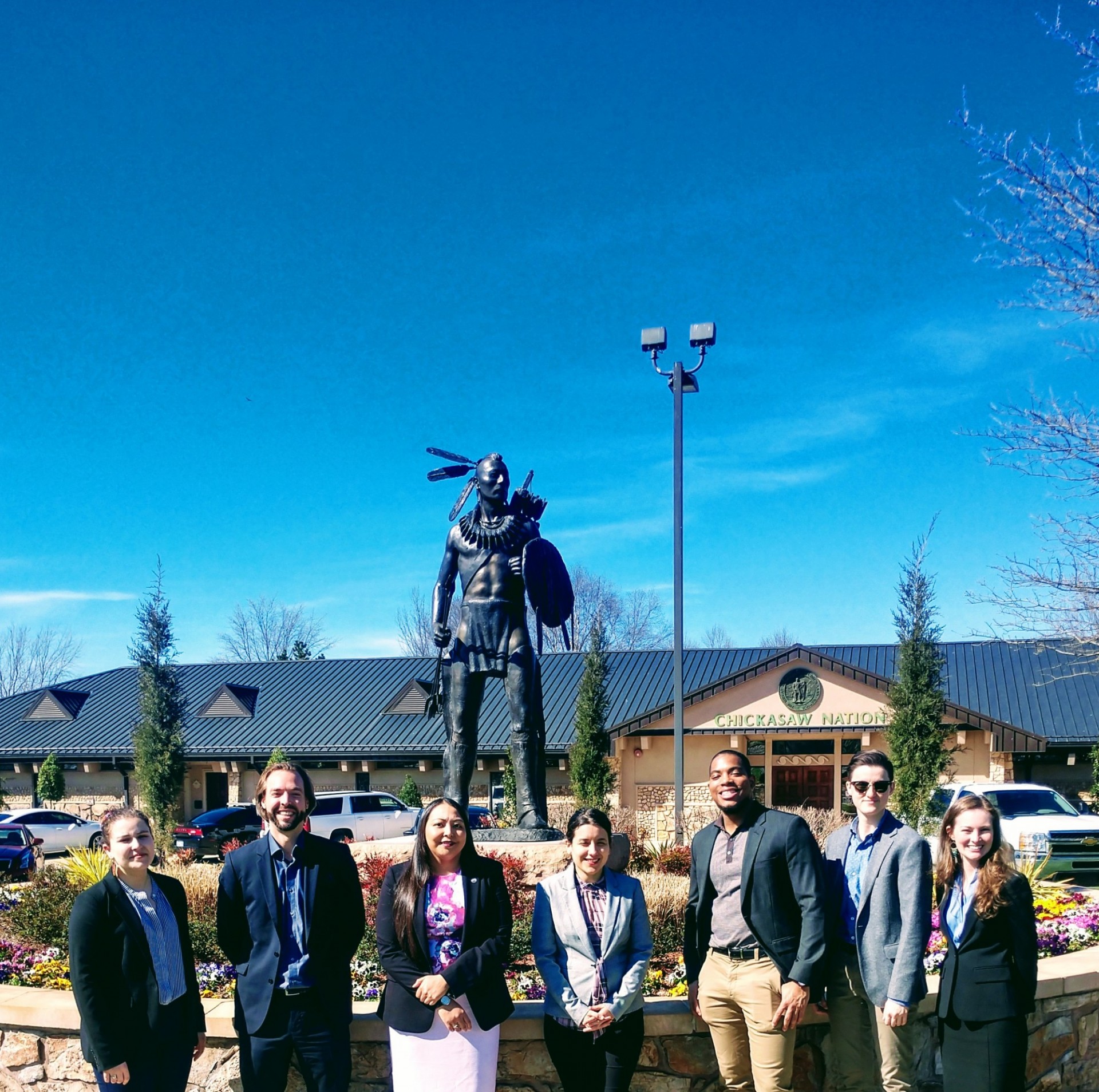 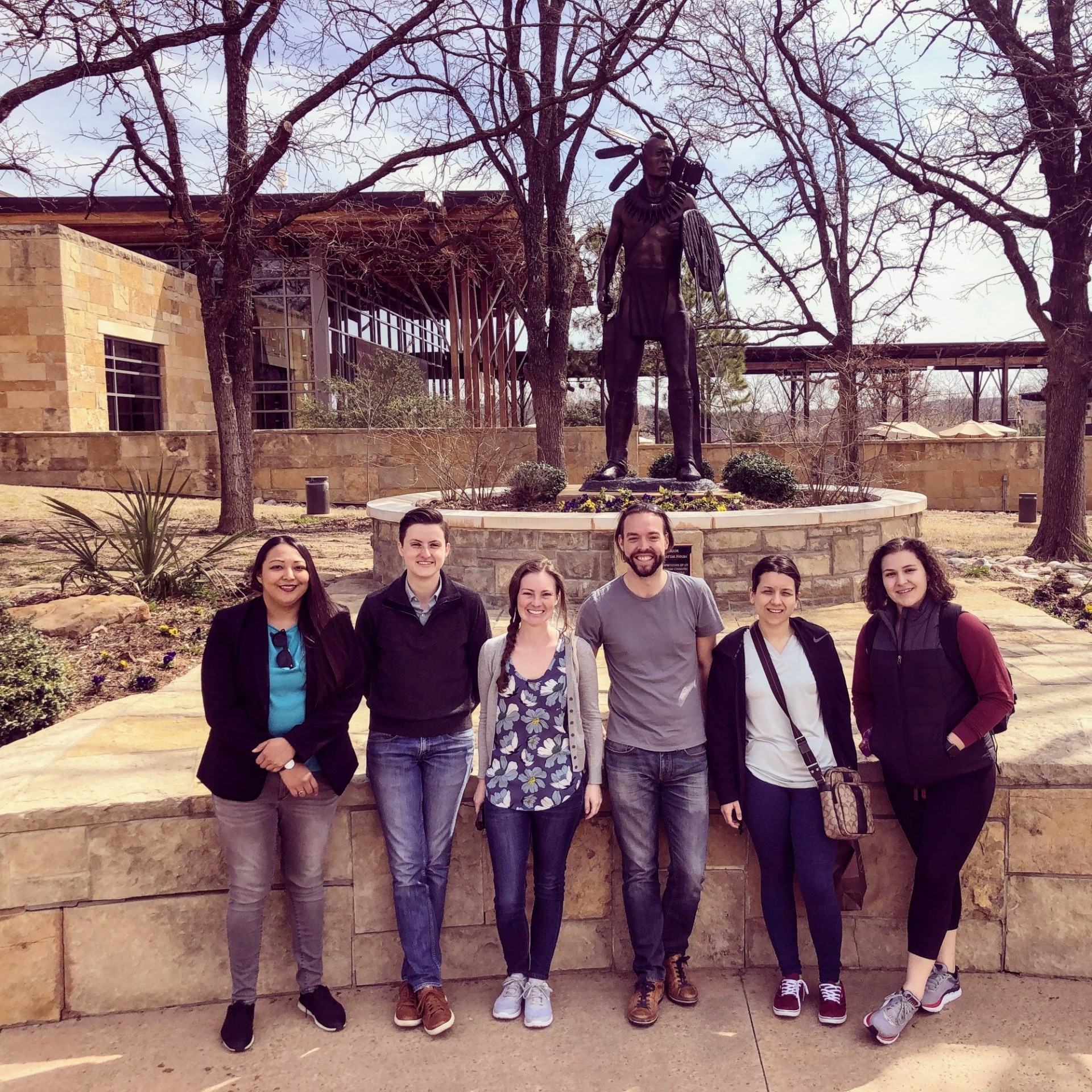 Proceeds from the show will support NALSA’s programming and pro bono service trips. Every year NALSA organizes two pro bono caravans during spring break to provide free legal assistance to tribal communities throughout Indian Country. This year, students will travel to Wisconsin to provide will-writing services to Chippewa communities in the northern region of the state. A second group of NALSA members will travel to Oklahoma to provide free estate planning and will-writing services and offer general legal guidance to tribes and low-income tribal members residing in Anadarko, the Chickasaw Nation, and the Muscogee (Creek) Nation.

In total these caravans will contribute over 520 pro bono hours in free legal assistance to low-income tribal citizens.

NALSA thanks Judah Friedlander for his generous donation and the Comedy Cellar for offering us the Village Underground room to hold the fundraiser! NALSA also thanks comedians Jon Fisch and Joyelle Johnson for being on the show. 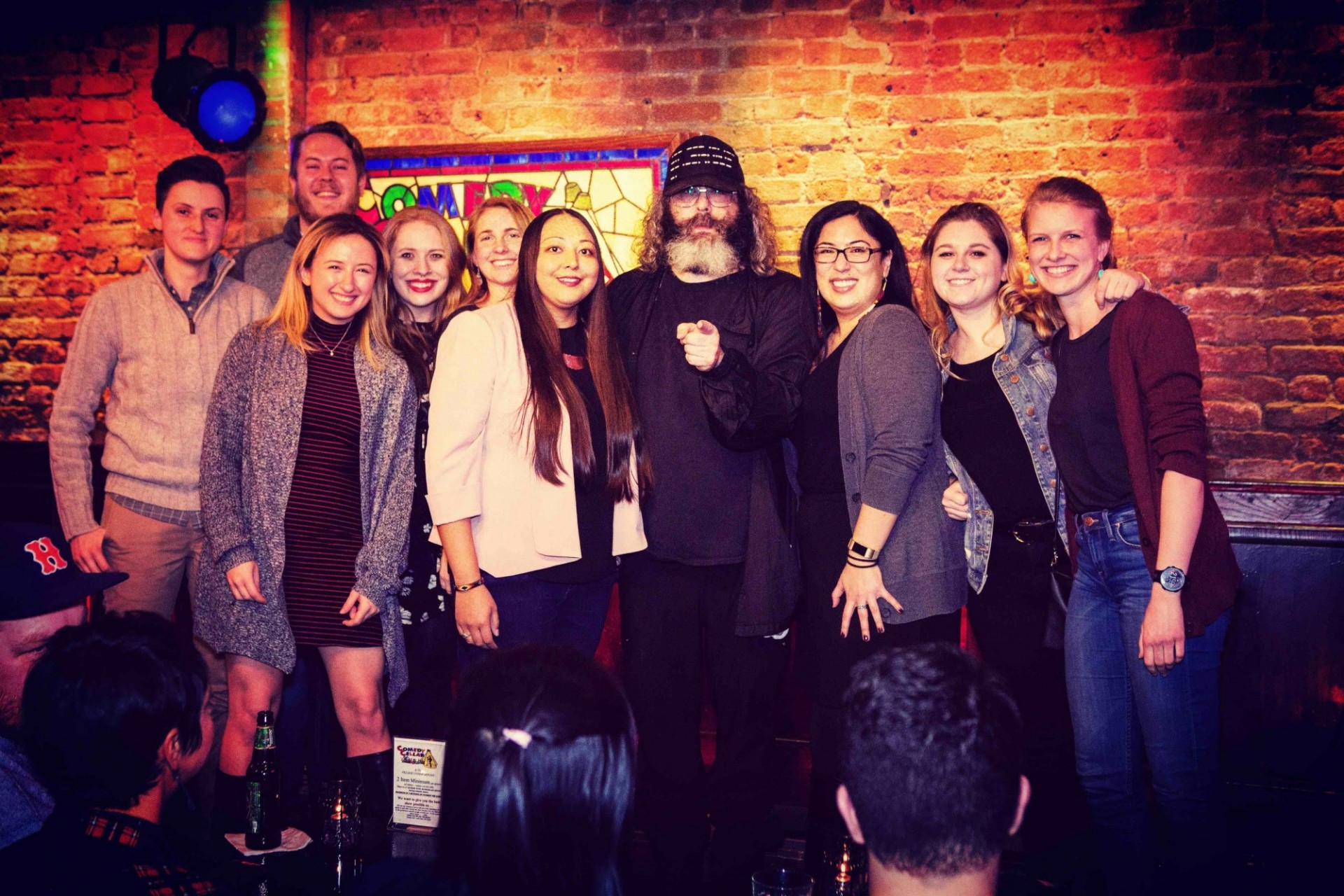 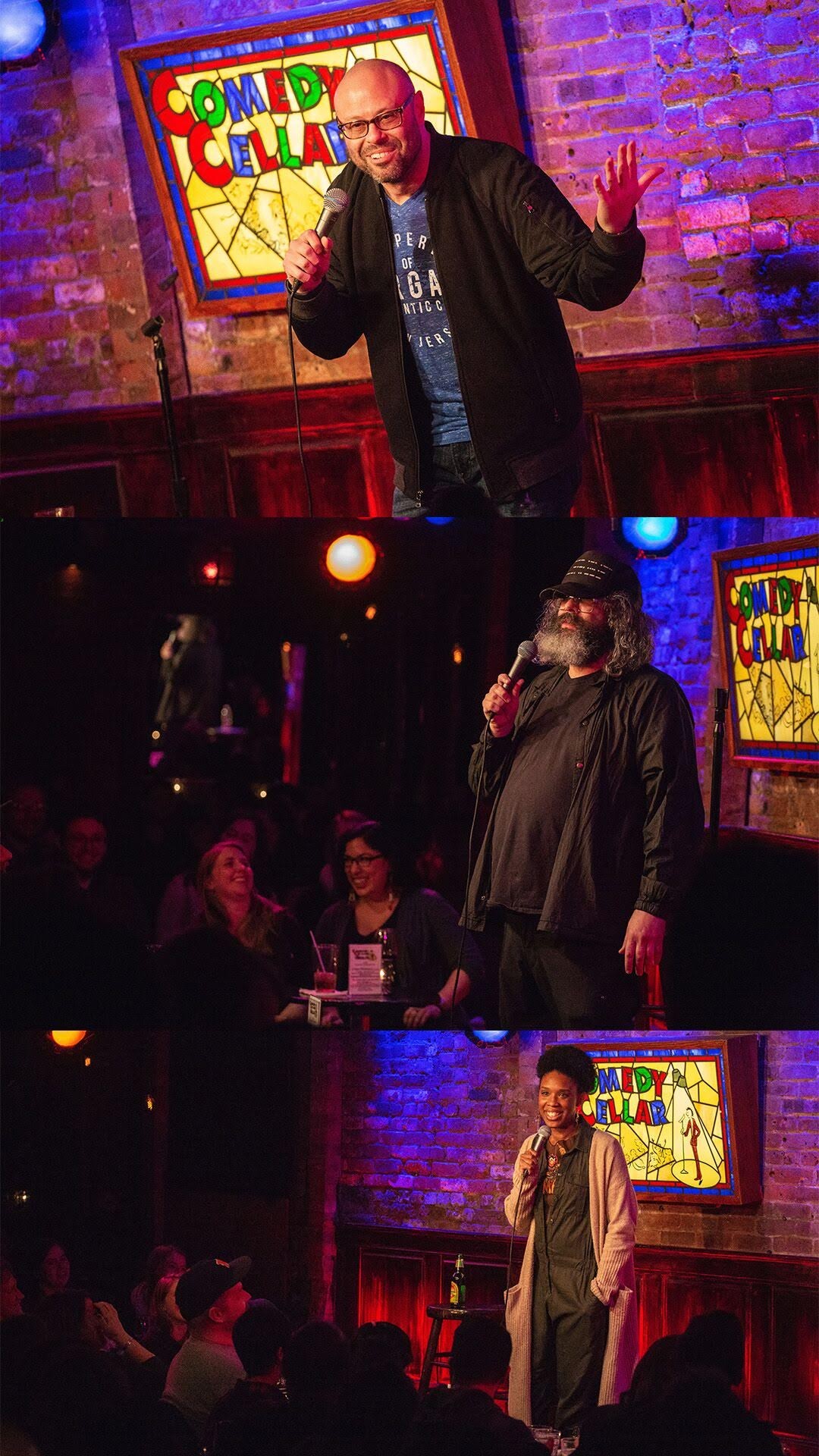 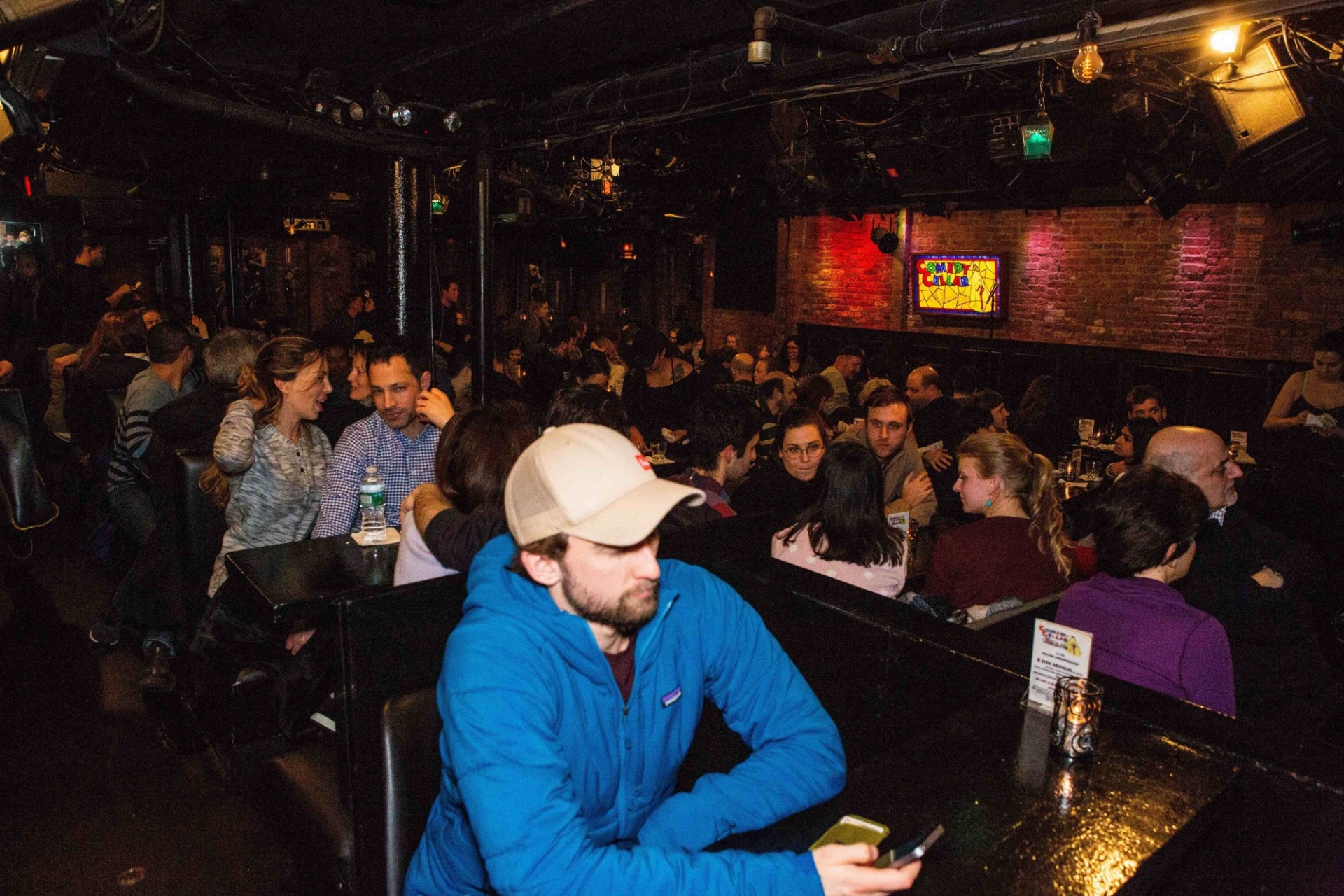 NALSA members and incoming 1Ls toured the Smithsonian’s National Museum of the American Indian downtown near Bowling Green and enjoyed dinner at a nearby restaurant. The group toured “Infinity of Nations” and “Taíno: Native Heritage and Identity in the Caribbean” and attended “Taíno Symposium Session 3: A Shared Vision for the Taíno Movement.”

NALSA board members hosted a table at Columbia Law School’s annual start-of-semester Block Party to meet 1Ls and welcome them to the NALSA community.

NALSA kicked off the fall semester and got to know the new 1Ls and LLMs with a happy hour at Arts & Crafts Beer Parlor in Morningside Heights.

The NALSA Executive Board hosted the first general body meeting of the year.

Kavanaugh and Native Americans: A dialogue on the SCOTUS nominee and his potential impact on Indigenous Peoples

NALSA joined the American Constitution Society in hosting a discussion on Judge Kavanaugh’s nomination to the Supreme Court and its impact on Native communities. The panel, featuring Noah Smith-Drelich, Agatha Erickson, and Juliana Bennington, highlighted Judge Kavanaugh’s past views, judgments, and the crucial role that Alaska Native voters played in the potential appointment of Kavanaugh to the bench.

Gearing Up For 1L Year: Discover the Secrets of Academic Success

NALSA joined other student affinity groups and Student Services to host Professor Kristen Underhill in a discussion about how to prepare for class, get the most out of the classroom experience, and get to know professors.

Along with other affinity groups, the Student Public Interest Network (SPIN), and the Office of Social Justice Initiatives (SJI), NALSA co-sponsored a lunchtime panel where 2Ls and 3Ls of color led a discussion on questions including: Where should I spend my 1L summer? What kinds of public interest internships are available to 1Ls? What is it like to do public interest work for your 1L summer? What is “public defense” and it is a good fit for me? What about civil legal services?

NALSA joined other affinity groups and Student Services in hosting a panel of upper-year students as they discussed exam preparation strategies. The students addressed questions including: What are some good study strategies? Do you need a study group? How can you manage your time studying for an exam? What do you do if you feel that you are not understanding some of the issues being covered in your courses?

NALSA and the Federalist Society co-hosted a discussion with the Hon. Jeremy Brave-Heart, Judge Pro Tempore of the Hopi Tribal Courts. Judge Brave-Heart discussed the history and nuances of Indian Law and the intersection of Indian Law with identity politics.

Indigenous Brooklyn: Ironworking and the Transmotion of Haudenosaunee Nationhood

NALSA welcomed Dr. Allan Downey, Columbia University Fulbright Fellow and author of The Creator's Game, for a lecture on his research on the history of the Indigenous Ironworkers who built iconic skyscrapers in New York City.

Mni Wiconi: An Update on the Legal Action at Standing Rock

NALSA partnered with the Office of Social Justice Initiatives (SJI) to host an SJI Monday discussion about ongoing litigation related to the Dakota Access Pipeline protests at Standing Rock in 2016. Columbia's very own Professor Bernard Harcourt and Associate in Law Noah Smith-Drelich are the attorneys in Thunderhawk v. County of Morton. They discussed the case alongside Wašté Win Young, the plaintiff, and Julian Brave Noisecat, policy analyst and writer.

NALSA hosted a study break for its members during finals study period. Students de-stressed by decorating cookies and celebrated the holiday season. 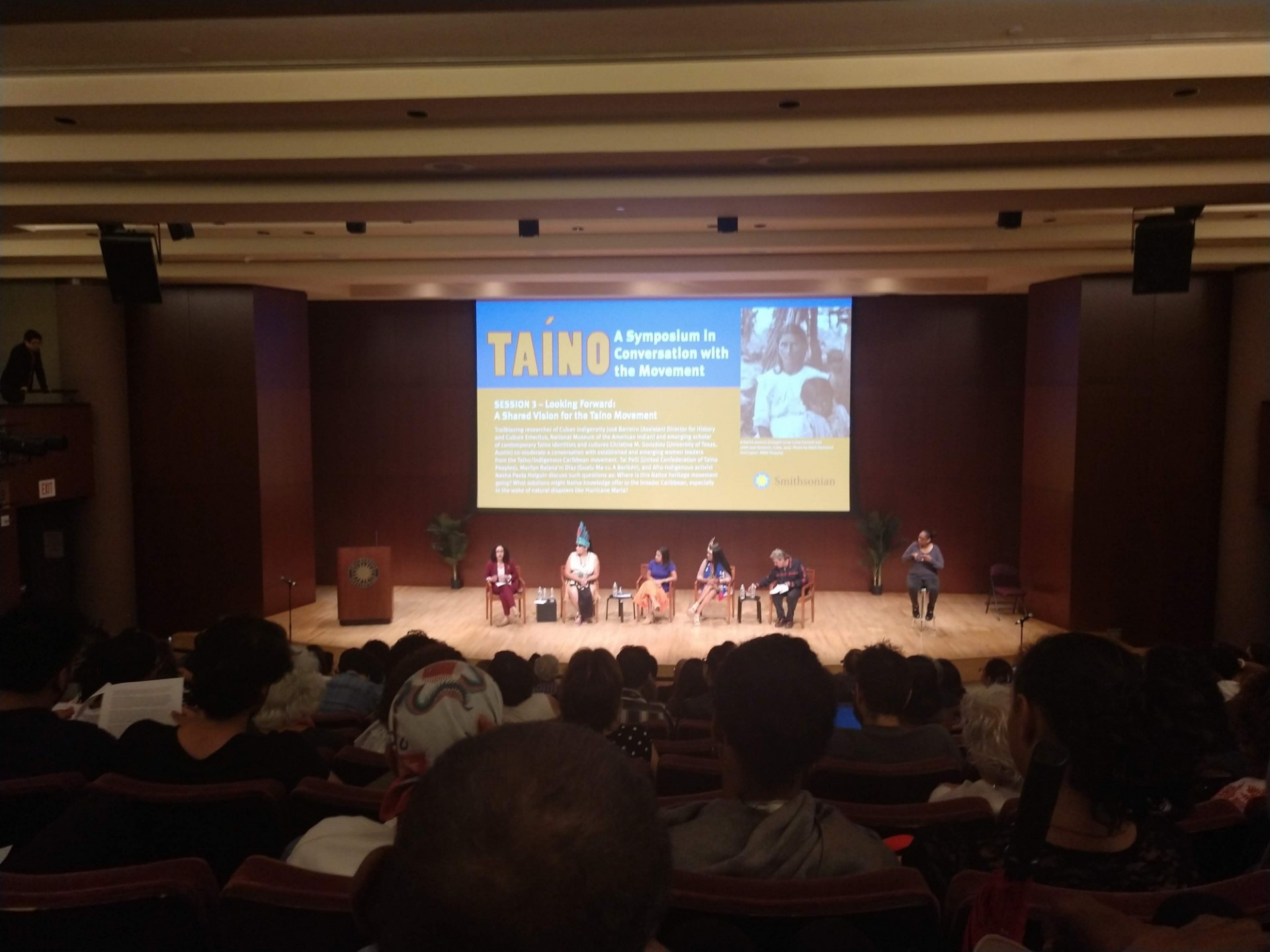 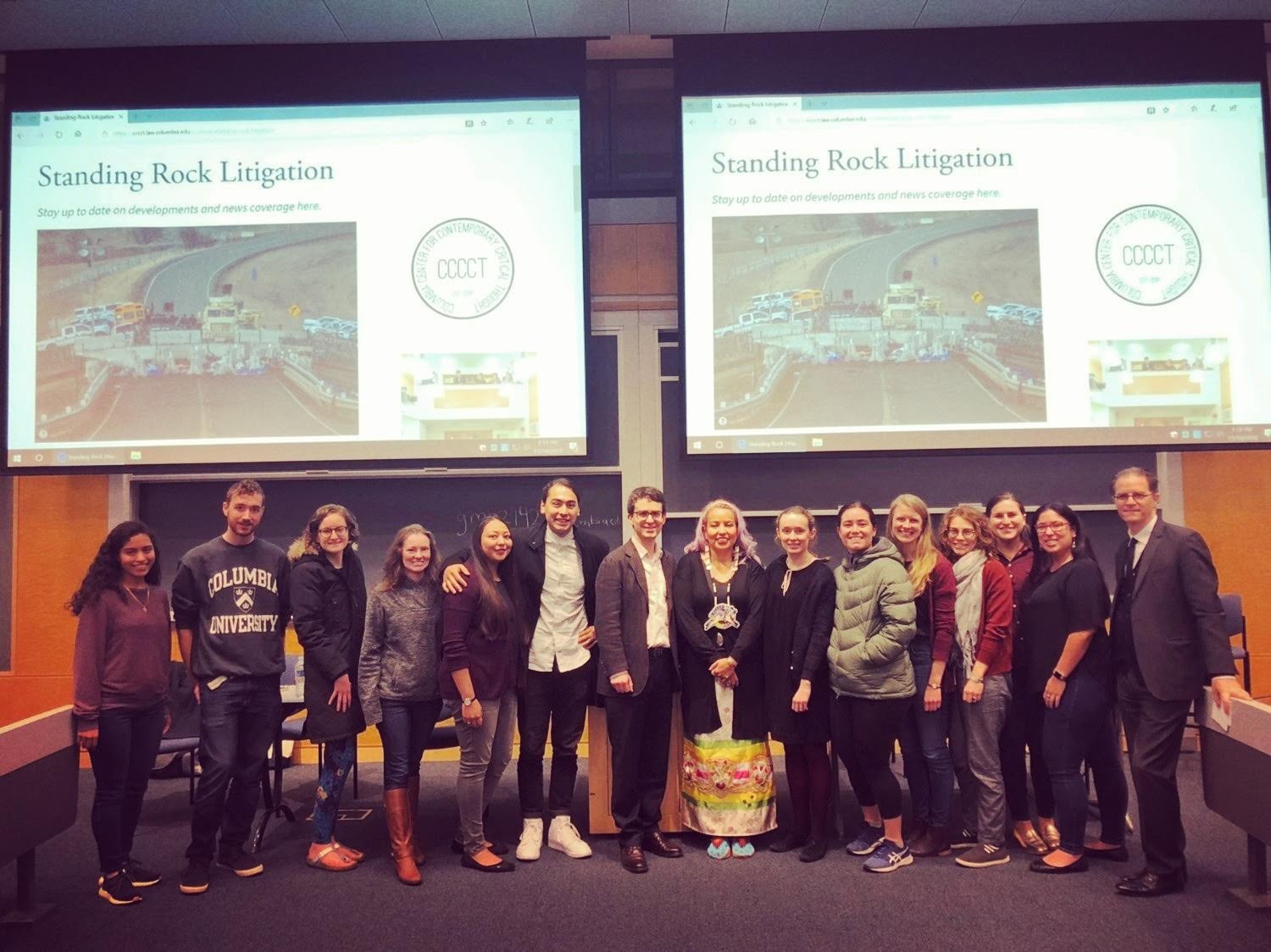 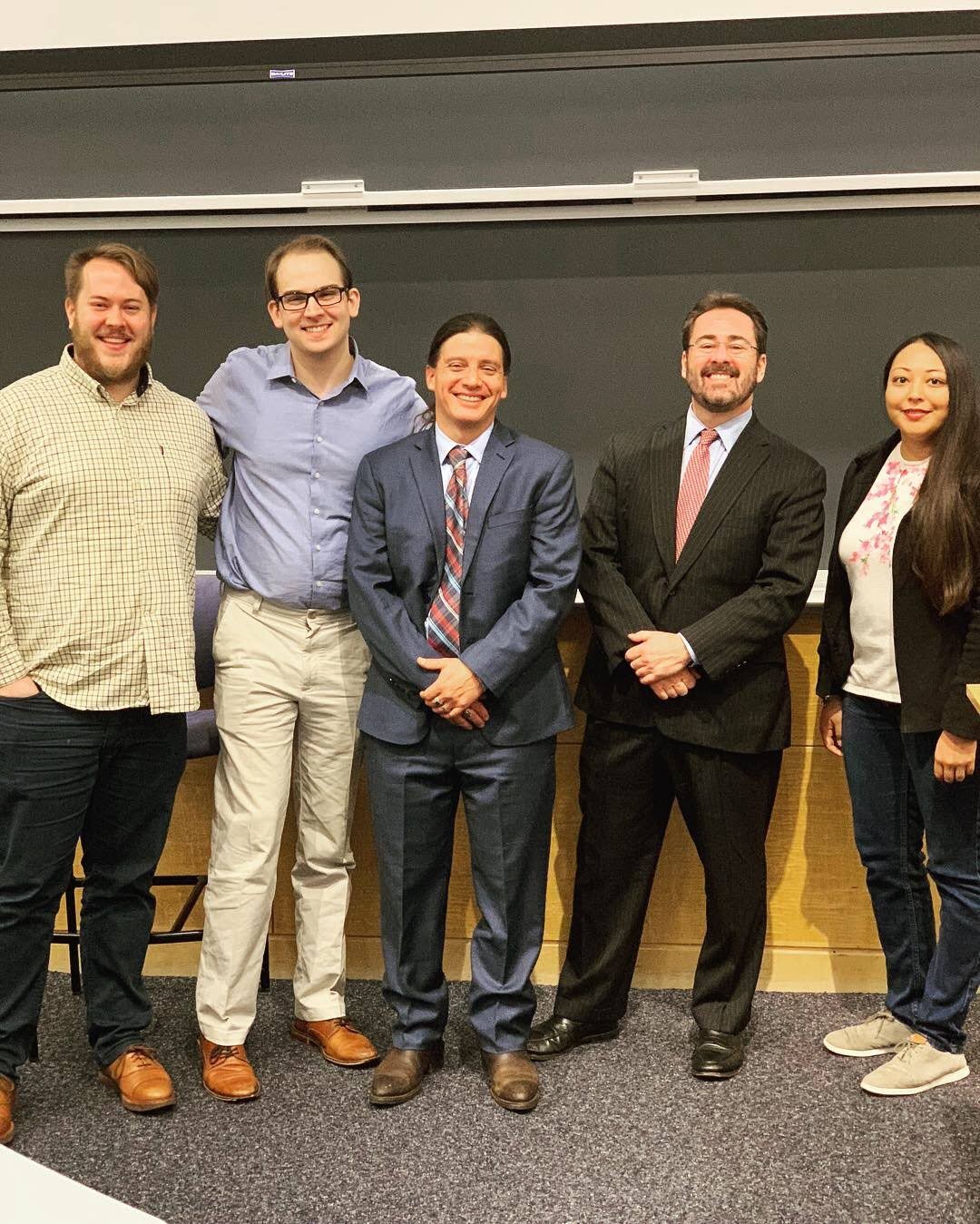 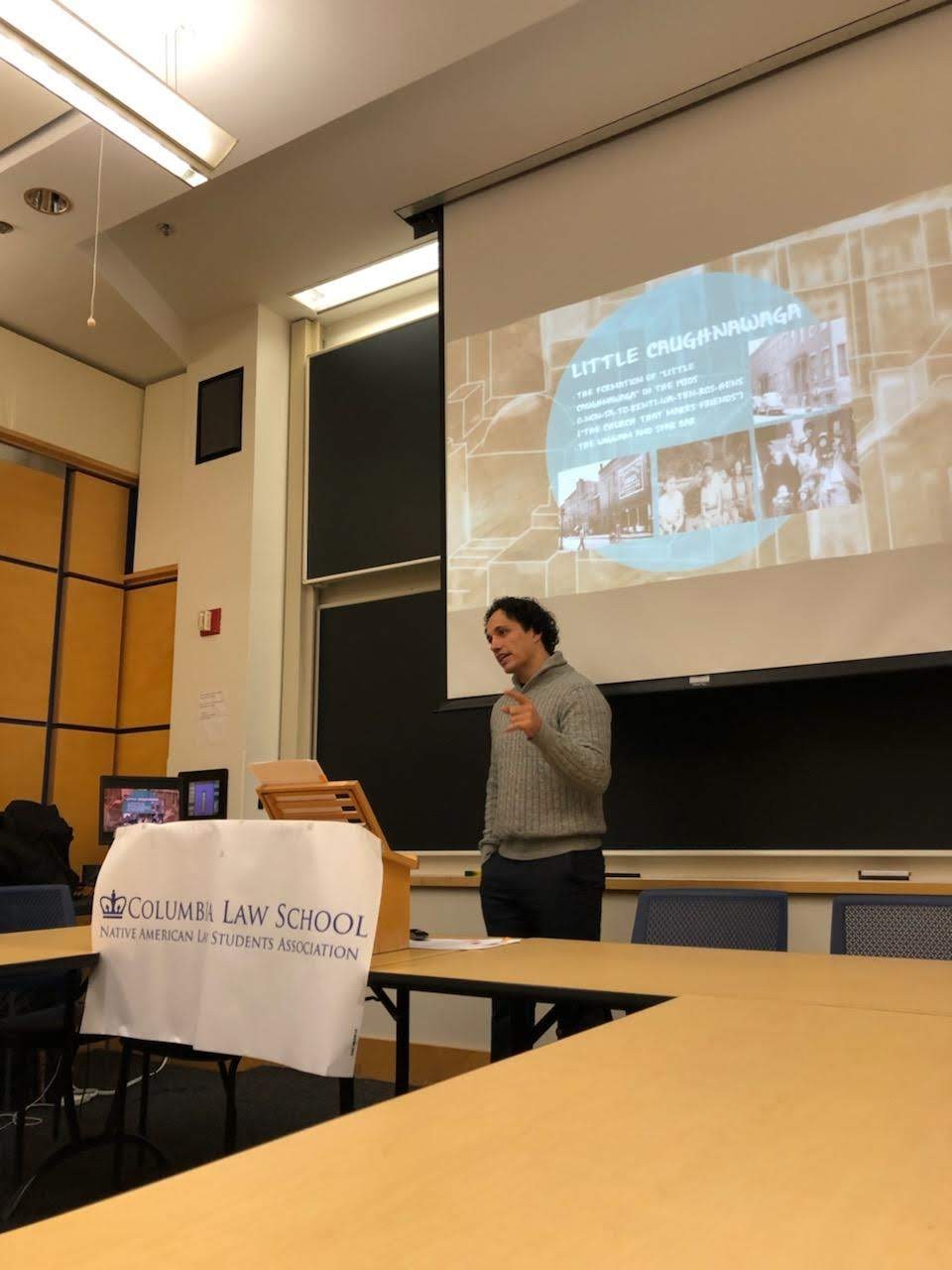 NALSA has partnered with Four Directions and Native Vote for many years to empower the Native American community through greater participation in the electoral process. This year we were also joined by two students from Yale Law School, and a Columbia Alumnus, Frank Holleman (JD ‘12). Another alumnus, Greg Lembrich, who has worked with and alongside Four Directions and Native Vote since the beginning of NALSA’s involvement, supported our team and took an entire day out of his hectic pre-midterm schedule to acquaint us with our polling stations on the Rosebud Sioux and Pine Ridge Reservations and their surrounding areas.

Our role as non-partisan poll observers was to make sure that all voters, but particularly Native American voters, were not prevented from voting when and where they were lawfully entitled to vote. We made sure election officials working at polling stations (who are usually local people brought in to work at the polls) knew what the law was and were applying it correctly as voters came in to vote. This involved, for example, ensuring that voters who came in without ID were allowed to fill out an affidavit to confirm their identity and then allowed to vote or contacting the County Auditor to verify an elector’s registration if he or she did not appear on the list at the polling station.

The teams had mixed experiences at our respective polling stations, and a troubling trend emerged of voters who had recently registered to vote not making it onto the register and being forced to cast provisional ballots. Nevertheless, Greg ran some of the numbers after election day and the numbers show that Native voters in South Dakota came out in force, with many of the highest increases in turn-out from the 2016 presidential elections being observed on reservations.

We also managed to fit in some sight-seeing around the Great Plains as we drove from Rapid City, South Dakota down to the Nebraska border for Election Day, including the snow-clad Black Hills National Forest, Crazy Horse Memorial, Mt. Rushmore, the site of the Massacre at Wounded Knee, and the astounding Badlands National Park.

Many thanks to Greg, Agatha Erickson and Juliana Bennington for all the hard work organizing the trip. Thanks also to Columbia Law School’s Social Justice Initiatives (SJI) for providing financial support for the trip. 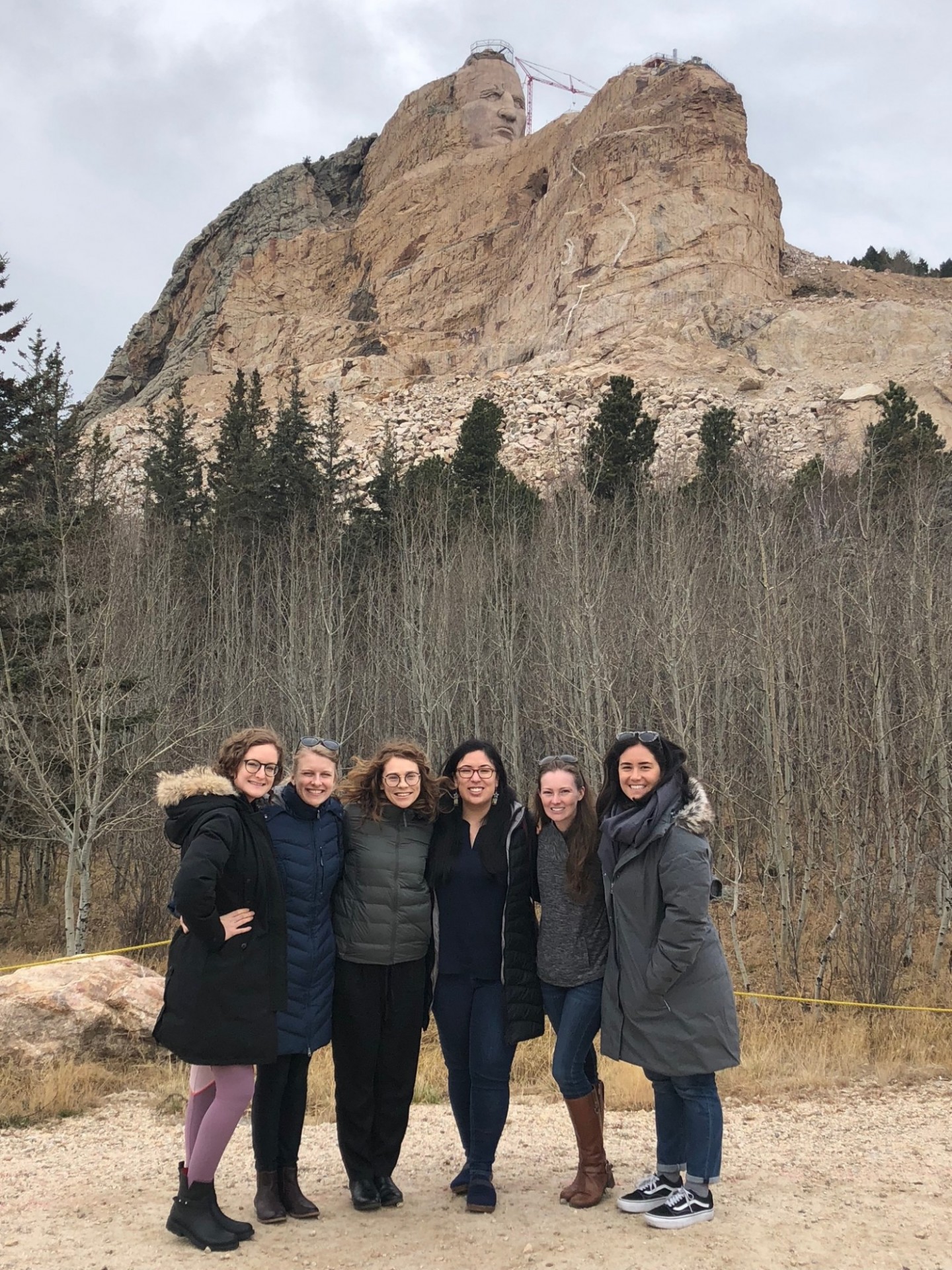 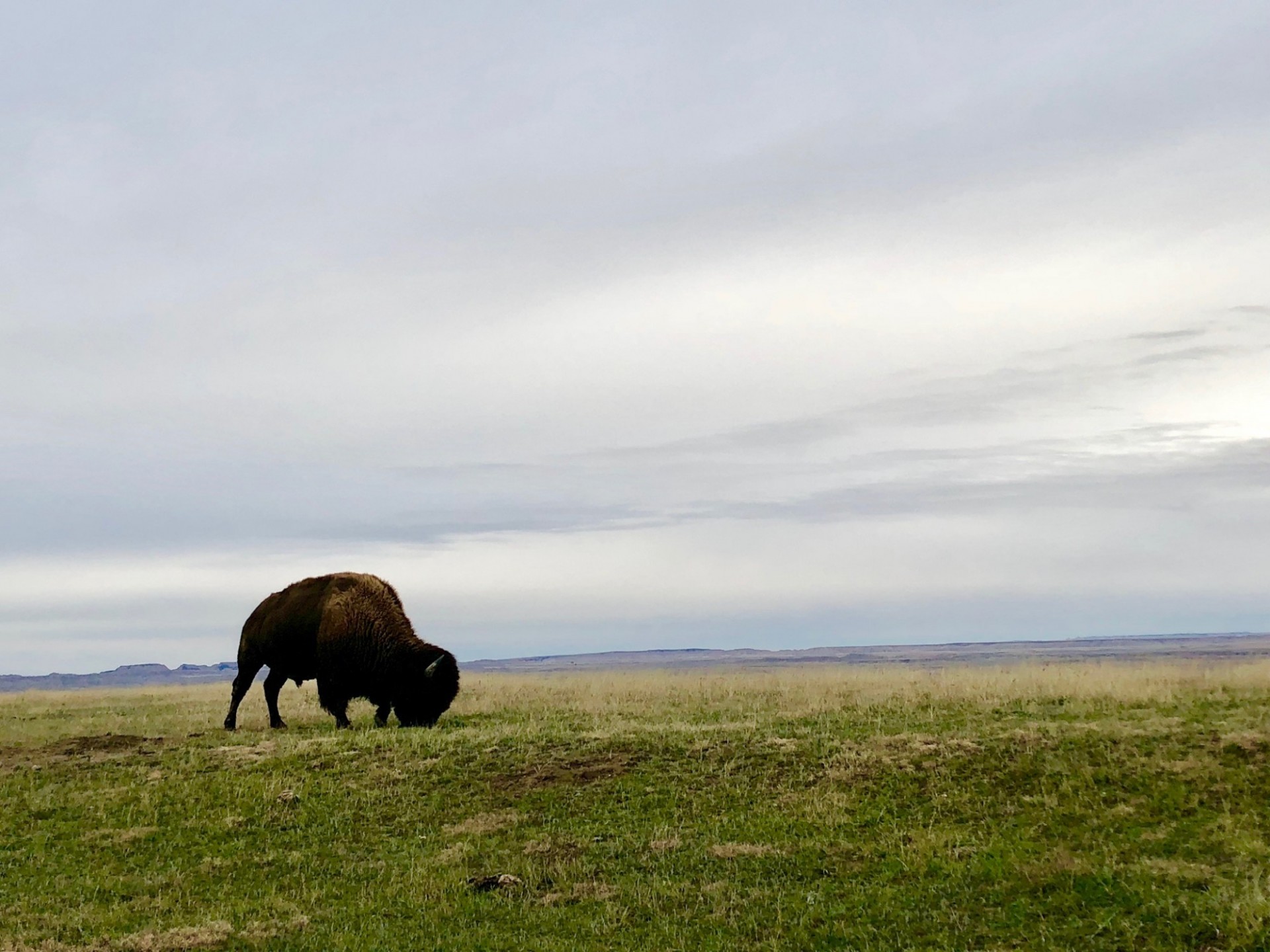 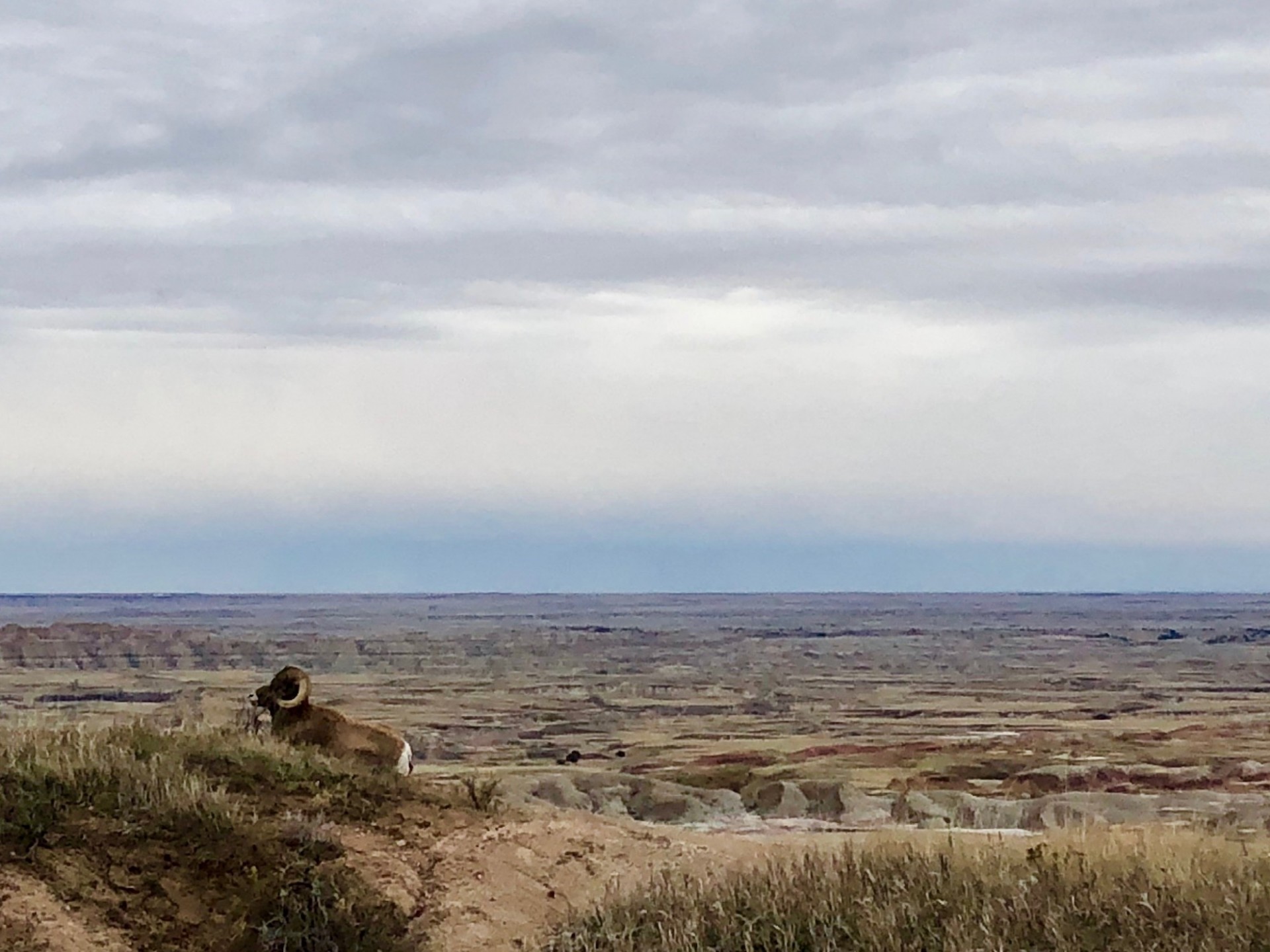 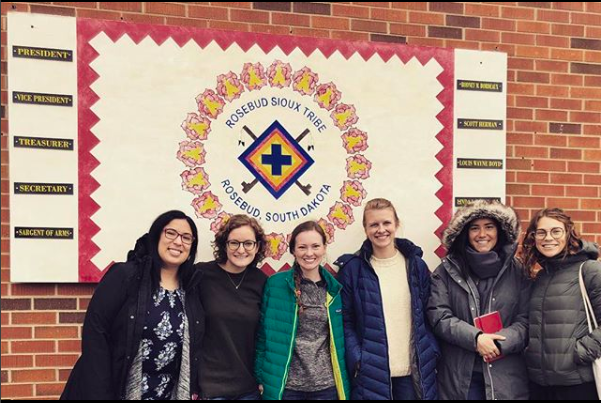 This year NALSA members Agatha Erickson 2L, Sarah Jackson 2L, Alyssa Braver 2L, Maryam Najam 2L, and Zoe Staum 3L  participated in the Alaska Legal Services Corporation (ALSC) Pro Bono Caravan caravan in Anchorage, Alaska. They worked with the Alaska Native law team on wills clinics at the Alaska Native hospital, the SCF Elders Center and at the Seward Elders center, family law clinic, and ICWA research for ALSC clients. In their off time, they were able to take in the sites around Anchorage and Seward visiting the Matanuska glacier, skiing and hiking in Anchorage, and visiting with the Justices and their clerks at the Alaska Supreme Court. 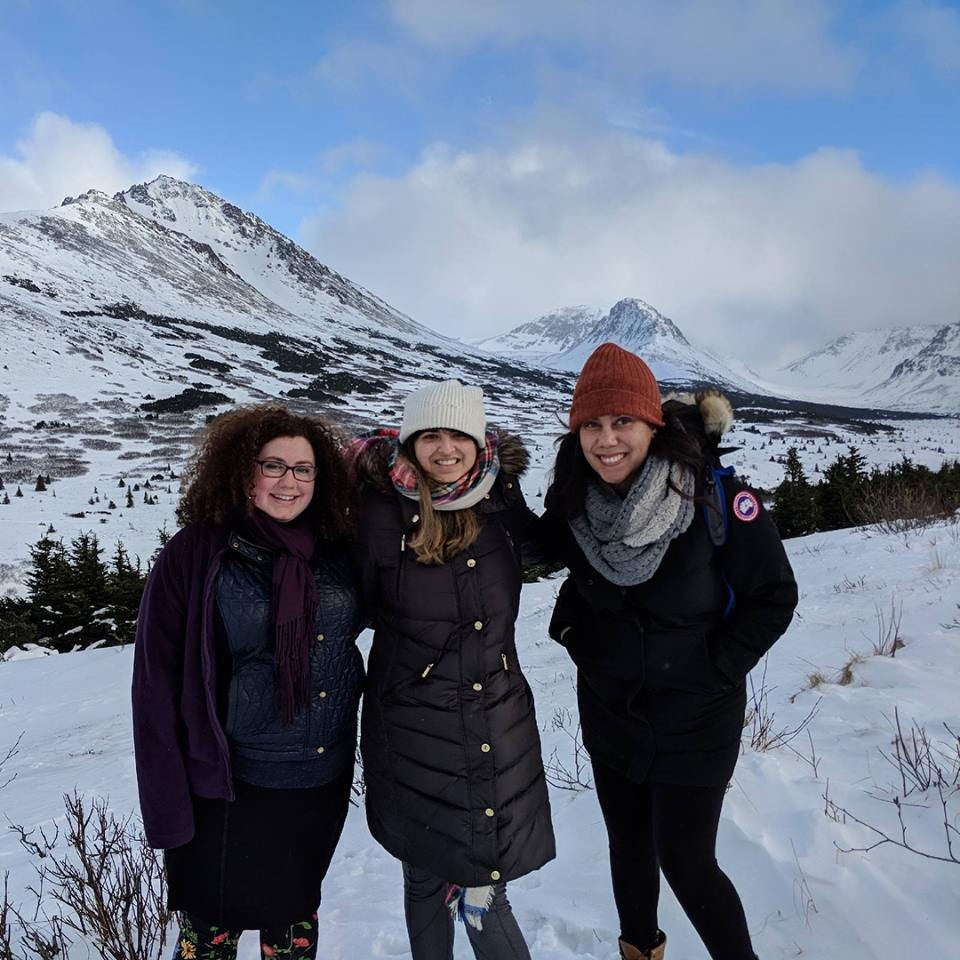 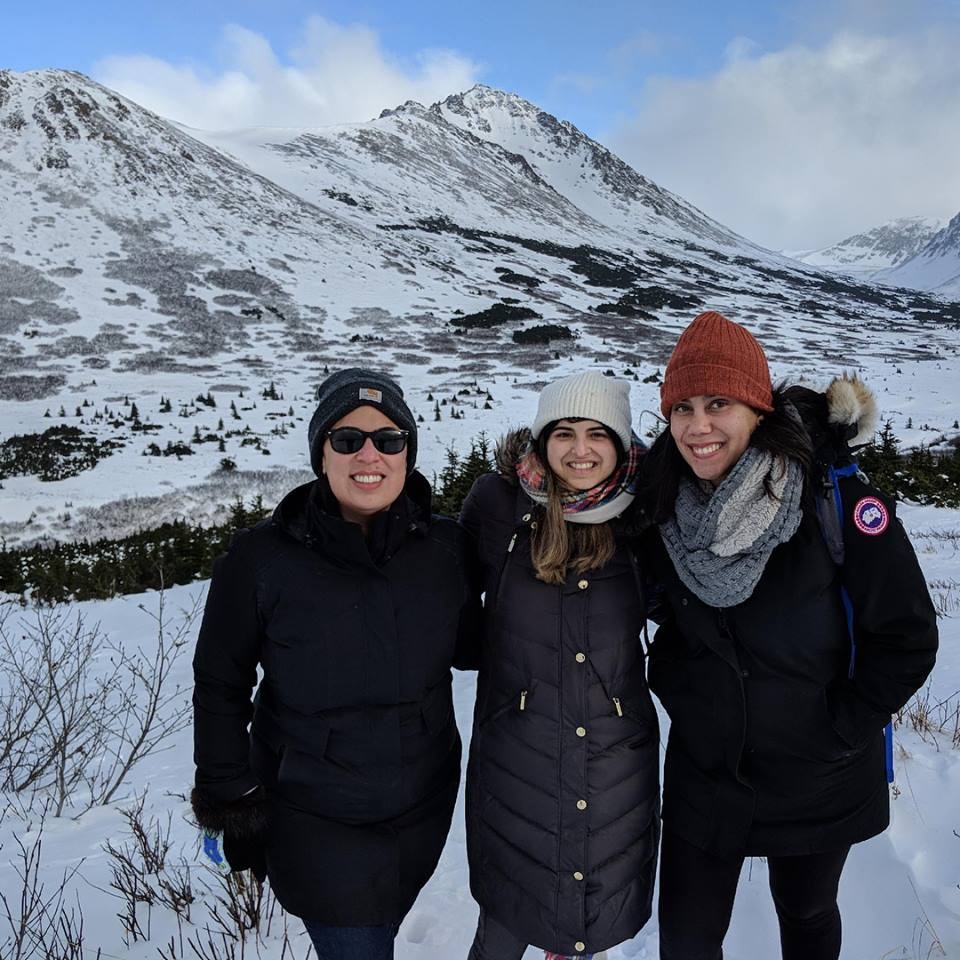 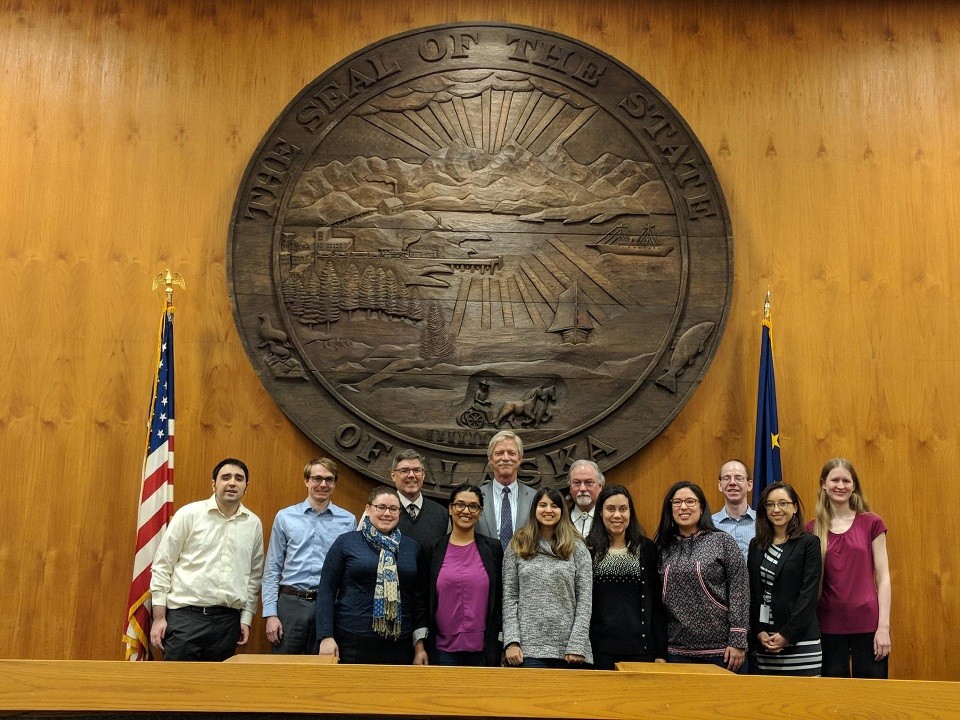 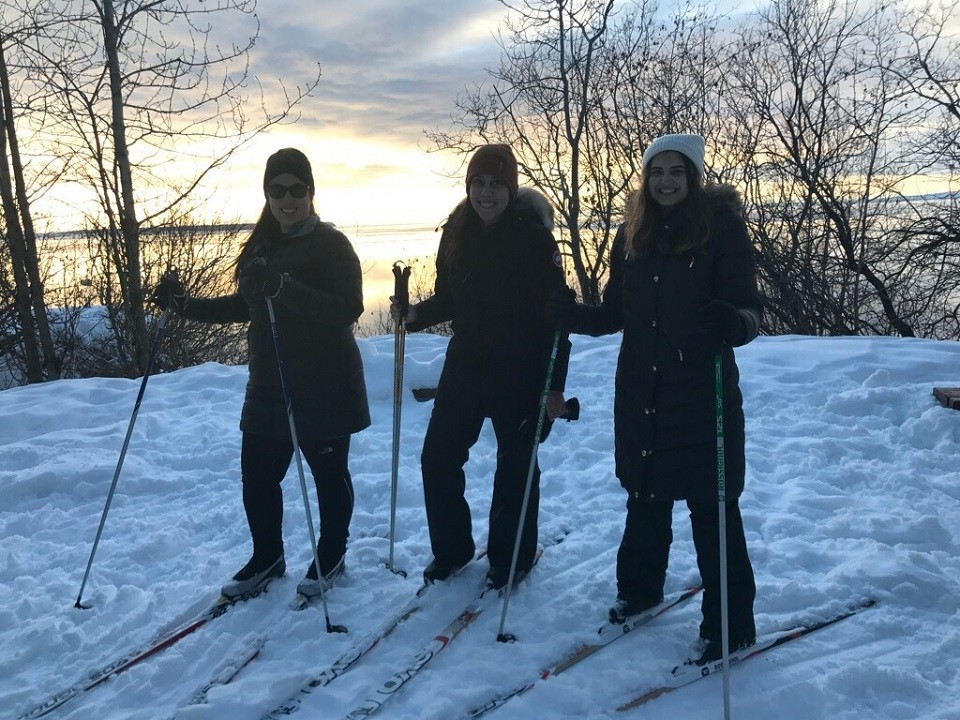 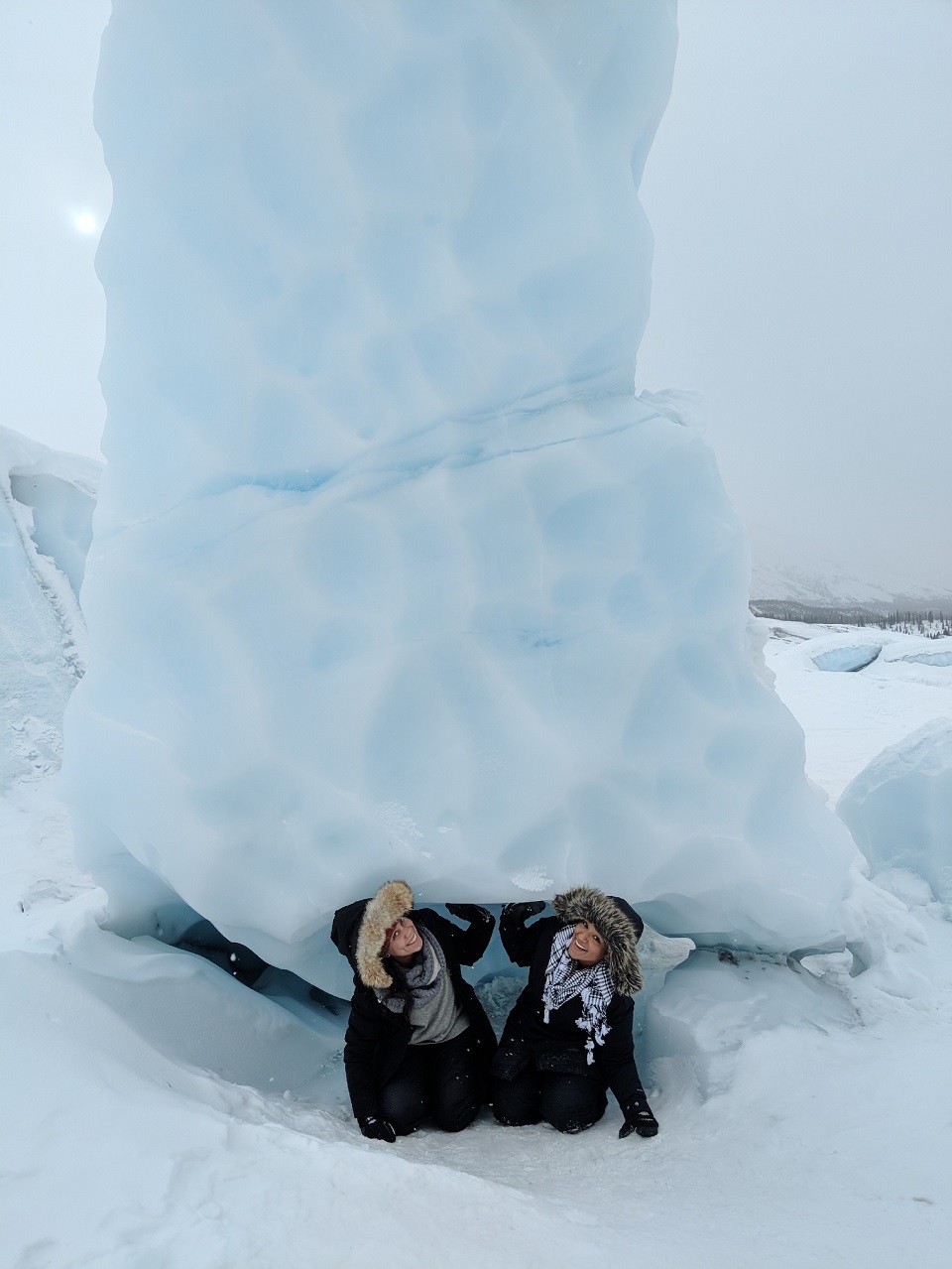 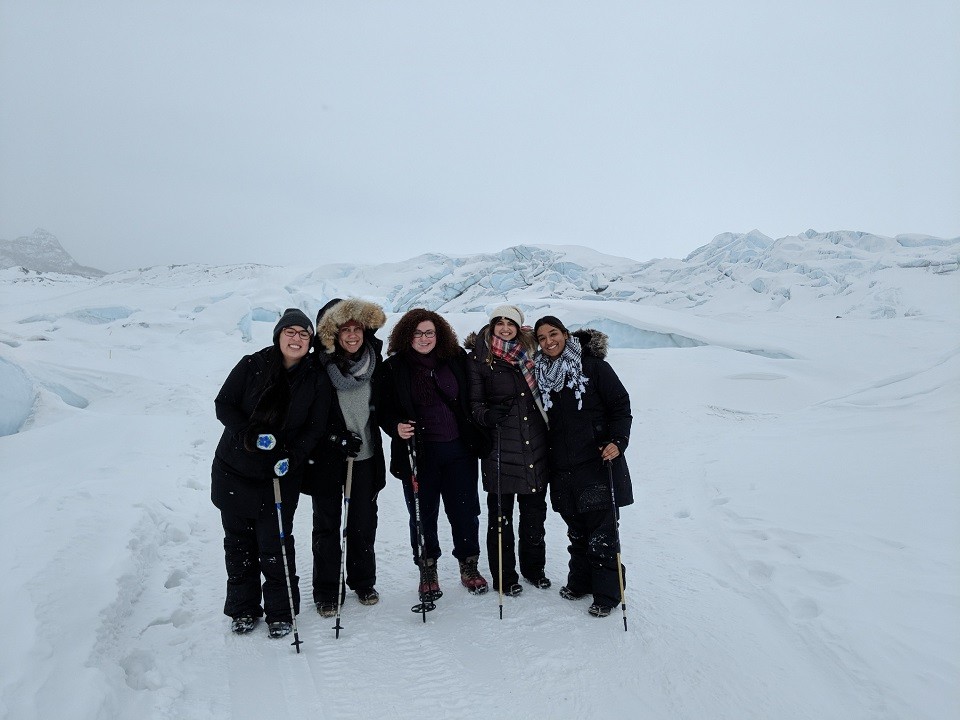 This year, a group of students from Columbia Law School’s NALSA Chapter traveled to Wisconsin to over spring break to do pro bono estate planning work for tribal members with Wisconsin Judicare. This was the seventh consecutive year that Columbia NALSA and Wisconsin Judicare partnered to provide legal services on reservations in Wisconsin. Every year the caravan has proven to be a valuable experience both for the students and the clients they serve; this year was no exception.

Volunteers spent four days in the field under the supervision of Judicare attorneys, working with the Ho-Chunk Nation in both Black River Falls and Wisconsin Dells, the Oneida Nation in Oneida, and the Stockbridge-Munsee Band of Mohican Indians in Bowler. These tribes span a varied geographic area of Wisconsin. Students met with tribal members individually to discuss their estate planning needs and prepare the relevant documents, before receiving final review of the documents from a Judicare attorney; clients left the caravan site with an executed, witnessed, and valid final will. The six student volunteers were able to produce approximately ninety wills and many additional powers of attorney over the course of the caravan!

Columbia NALSA hosted a group of Yale students to discuss the law school admissions process and NALSA events and initiatives.

In honor of Indigenous Peoples’ Day, on Monday, October 10, Columbia Law School’s NALSA chapter hosted a screening of “PAYA: The Water Story of the Paiute.” PAYA documents the history of Paiute Native Americans who constructed and managed 60-miles of intricate irrigation systems in Owens Valley for millennia long before Los Angeles secured its largest source of water through modern engineering a century ago. After the Indian War of 1863, surviving Paiute returned to the Valley from the Eastern Sierra and White Mountains to find their ancient waterworks taken over by white settlers. Today, 150-years later, the Paiute continue the fight to save their waterworks, which are remnant in the Owens Valley landscape. PAYA (“water” in Paiute) stands to recover Paiute water culture and history through the powerful medium of documentary film. For more information on the film, please go to http://payathemovie.com/.

[email protected]
Back to Top